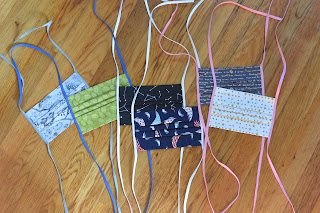 My sister-in-law sent us two masks that she made back in March.  We also had two cloth masks that my mom had made for us (with elastic around the ears), so when we needed more we had some experience with two different styles.  My husband and I prefer the style with ties, so I knocked off the ones my SIL had made to make six more.
These masks are made of two layers of quilting cotton.  I started with a double-layer rectangle, 6.75" wide and 6" tall finished at the top and bottom edge (raw edges on the sides are fine, since they'll be enclosed in the bias tape ties).  I ironed in three evenly spaced pleats in the middle of the mask, so the finished pressed height is 4".  Then for each mask I cut two one-yard lengths of 1/4" double-fold bias tape, folded the ends inside, and sewed along the open side of the bias tape, enclosing the side of the mask in the middle.  By far the most time-consuming part of this was pressing the pleats in the mask.
I made this round of masks using all materials that I already had on hand.  The limiting factor was the bias tape - I'm totally out now, and I couldn't find more online for a reasonable price/in reasonable quantities.  We need some more masks - I'd like to have about 20 by the time I go back to work in mid-August so we won't be scrambling to get mask laundry done all the time - so I'm going to try making my own bias tape using this tutorial.
These masks have been working well for us.  One of my husband's coworkers admired them enough to ask if I was selling them (I'm not, but I will make a few extra in the next batch so my husband can give one or two away at work)!
Posted by Katherine at 3:57 PM No comments: 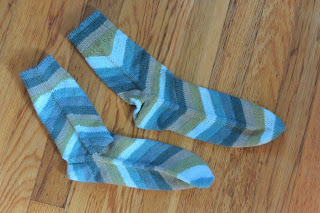 These are Skew socks, with Knitpicks Felici yarn.  I really like how they turned out in self-striping yarn!  I used 2mm and 2.25mm needles.  I started them in May 2019 and finished them at the end of February 2020.  I did most of the knitting in the car riding to and from church (I'm a Unitarian Universalist and my church is in a city about half an hour away from the town where I live).
This is my second pair of skew socks (although maybe I should say third, because I knit the first pair twice!).  My first pair are one of my favorite pairs of socks.  They fit me really well, although they are a bit snug to get them on and off - but that also means that they stay put really well once they're on.  They're also interesting and fun to knit.  I rarely knit the same sock pattern twice, but I like this pattern so much that I'll probably knit it at least one more time!
Posted by Katherine at 5:12 PM No comments: 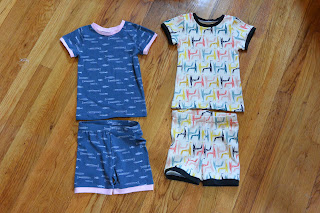 For his second birthday, I made my toddler two pairs of summer pajamas.  The pattern is Peekaboo Patterns Alex & Anna pajamas, which has short, long, and sleeveless options.  My son is currently wearing 2T clothing, but he's in bulky cloth diapers.  His chest measurement put him in the 2T top, and his hip measurement around his night-time diaper put him in the 3T shorts, but I decided to make him the 4T top and shorts in the hopes that they'll fit him for at least two summers. 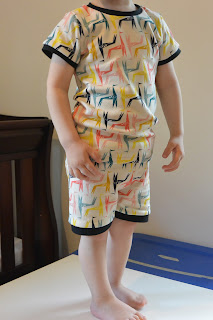 The main fabrics are from a grab box I ordered from Fabricworm fabrics a few months ago.  The blue fish are a 95% cotton, 5% spandex jersey.  It was wide, so I was able to cut the whole set out of just half a yard!  I still have a second piece, which is about a yard.  The giraffes are an interlock knit, and it seems pretty stretchy, although the selvage didn't include a label or fiber content.  It wasn't quite as wide, but I still do have some leftover for something else - which is nice, because we love giraffes!  The interlock was very easy to sew.  I cut the contrasting bands on both pairs from scraps leftover from the two pairs of maternity leggings I made myself last winter. 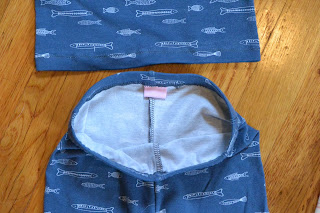 I constructed these almost entirely on my serger.  The instructions were very clear, and they went together pretty quickly and easily, although it would have been nice if there were notches to help with setting in the sleeves.  The only elastic I had was non-roll elastic (and I couldn't buy any other elastic because people pandemic-panic-bought all of the elastic!), so I couldn't sew the elastic directly to the top of the shorts as instructed.  Instead, I made a snug casing with a tiny seam allowance (so as not to reduce the rise) and threaded the non-roll elastic through.  I stuck a little folded scrap of the pink jersey into the back waist of each pair of shorts so that my husband and son will be able to identify the front and back (the shirts have the neckband seam at the back, so I figured the fake tag wasn't necessary there).  I intended to hem the shirt and topstitch the band seams with a double needle, but then I stupidly broke the double needle by installing it in my machine without checking that the needle was centered.  Instead, I hemmed the shirts with a zigzag stitch and decided not to topstitch the band seams.
Posted by Katherine at 5:15 PM No comments: 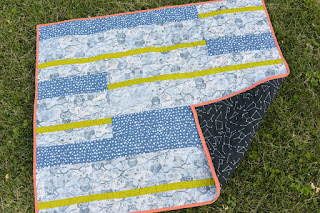 This is an old project.  I made two baby quilts last summer from the same easy pattern, from  book called 3-Fabric Quilts.  This one was for my cousin's baby, born August 2019, and the other was for a colleague's baby, born September 2019.  I can't find a photograph of the other one, but I was happy with how both of them turned out.

They were very easy and quick to make.  I think the most time-consuming part was thread-basting them.  I would definitely use this pattern or something similar again!
Posted by Katherine at 11:00 AM No comments: 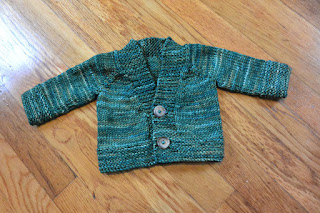 This is actually a recent project - I only finished it about a month ago!  I started it after we got home from the hospital with our new baby, born at the end of March.  It was an easy and quick knit, and turned out great!  The yarn is Malabrigo Rios, and it was wonderful to work with and looks fantastic in the finished sweater.  I think it will hold up well, too - it's a pretty firmly spun yarn.

The pattern is TinCanKnits Harvest in the smallest size.  I lengthened the body a bit, but not the sleeves (and I wish I had lengthened the body a bit more, because my babies are long and skinny).  The sleeves are the perfect length.  This pattern is awesome - it's free, and like all TinCanKnits patterns it includes an unbelievably wide size range, from newborn to very large adult.  I included the optional buttonholes, and closed it with buttons from my button jar, salvaged from some worn out item of clothing that I can't remember.
Posted by Katherine at 10:25 AM No comments: 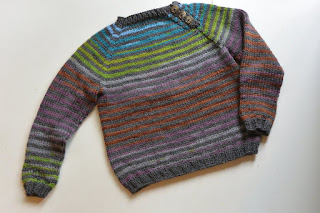 The item I was most proud of is the little striped sweater I made for my toddler.  I used one skein of Cascade 220 Superwash (the charcoal grey) and about one and a half skeins of Liberty Print worsted, which is apparently now discontinued.  The sweater was inspired by one made by Stephanie Pearl-McPhee (the Yarn Harlot) several years ago - this is the second sweater I've knit based on that one.  The first was a cardigan I made for my niece when she was a toddler.  I pretty much winged the pattern using the raglan recipe in The Knitter's Handy Book of Top-Down Sweaters.  I put a little bit of care into starting the sleeves at a point in the skein that would give the stripe sequence some continuity across and down the sweater.  I'm pretty thrilled with how it came out, although the sleeves are a bit long and the bind-offs are kind of tight (I very nearly ran out of the grey yarn).  It didn't win a ribbon - the comment from the judge was that the bind-offs are too tight (true) and that the seams were messy (which I can't figure out, because the sweater is seamless).

The other item I finished last year was a blouse in lovely Lovely Liberty of London lawn, which I've never managed to photograph.  I started it at the end of summer 2017, right before I got pregnant with my older son.  I finished it at the beginning of summer 2019, just in time to enter it in the state fair.  I still haven't worn it very many times, because I got pregnant with my second son in summer 2019, and it will probably be a while before I can wear it, because it's not compatible with nursing or pumping.  I'm really proud of it, and will try to get a blog post about how I made it up at some point (with some photos of it on the hanger).  It didn't win anything, either.

The two items I won ribbons for were much older - the rules of our state fair don't say you have to have made the item in the last year, only that it can't have been entered in the state fair before.  My blue Washi dress won a 2nd place ribbon in the women's dress category, and my Deep in the Forest shawl won an honorable mention in the lace shawl category!
Posted by Katherine at 4:06 PM No comments: 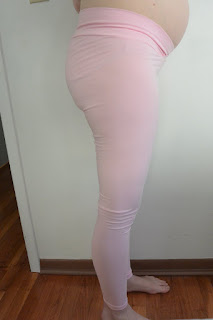 This post is way, way delayed (in fact, the baby has now arrived, about two weeks before my due date!), but I sewed myself two pairs of maternity leggings this winter and only ever got around to photographing one of them.  These are the Patterns for Pirates Peg Leg Leggings, maternity version.  The pink pair is the under-belly V-waistband version, sewn in (if I remember correctly) Kauffman Laguna knit, which is a cotton-spandex knit that I wished had been just a tiny bit more stretchy for this pattern.  They were still pretty comfortable throughout my whole pregnancy, though - and I'm hoping I can still wear them now that I'm no longer pregnant.  They are pajama bottoms for my long flannel nightgown - in our midwestern winters, even a long nightgown doesn't quite cut it to keep my legs warm. 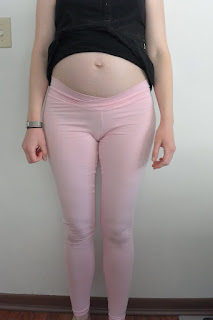 The other pair, which I never got around to photographing, are black, and made in a 90%cotton/10%spandex blend I bought at JoAnn fabric.  They are the overbelly waistband version, and they have the perfect amount of stretch.  They were super comfortable and I wore them under dresses to work, church, and everywhere else at least twice a week.

Off the top of my head, I don't remember what size I made.  It was whatever the pattern suggested for my hip measurement.  I do know I lengthened them by 2.25", divided evenly at each of the three cutting lines as suggested in the pattern (I'm 5'10", and if I remember correctly the pattern said it was graded for a 5'5" woman).  The size was correct widthwise and the length was perfect. 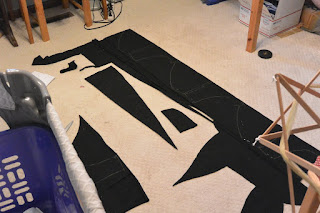 In the interest of not wasting fabric and I always need undies, whenever I cut out a cotton/spandex knit garment I cut as many pairs of Seamwork Geneva undies as I can from the scraps.  Between the scraps from these two pairs of leggings, I think I have 6 or 7 pairs of undies that I haven't sewn up yet.  We'll see if I get to that this spring/summer (or Me-Made-May?) - with two kids now, it will probably take me a while to figure out how to fit sewing time into my new routine.
Posted by Katherine at 11:26 PM No comments: